Sure, numbers don’t lie but just numbers didn’t really give us an idea about how big the Statue of Unity really is. To understand their true meaning we had to feel them. We knew that the Statue of Unity, standing at 182 metres is now the world’s tallest statue. But not until we stood next to it, dwarfed even by the feet of the Iron Man of India, did we grasp the full enormity of this statue.

What is the Statue of Unity?

The Statue of Unity is the statue of Sardar Vallabhai Patel. He is popularly referred to as the Iron Man of India. Post India’s independence in 1947, he played a pivotal role in bringing all the then-disjointed princely states into the Union of India. As a tribute to his towering personality, the statue, the tallest statue in the world, is rightly called the Statue of Unity.

What went into the making of the Statue of Unity

While its enormity hits even at first glance, the engineering aspect makes the visit to the Statue of Unity even more impactful. We were given a quick introduction to the factors considered at the design stages.

The first challenge was the basic structure. The statue depicts Sardar Patel in a walking pose. This means there’s a massive gap of 6.4 meters between the two feet and is at its most slender at the base. which is unlike any other tall statue built in the world so far.

The Statue of Unity is located right in the middle of the Narmada river flanked by the Satpura and the Vindhya mountain ranges. This location exposes the statue to a wind tunnel effect. Historical wind speeds at this location were studied. It was found that wind speeds could go up to roughly 130 km/hr. The succession effect of the wind at the back also had to be factored in. The air gap at the base, due to the walking posture also had to be considered. The statue is engineered to withstand wind speeds up to 180 km/hr, taking all these factors into consideration.

The earthquake history at this location was also studied. The Statue of Unity can withstand earthquakes measuring up to 6.5 on the Richter Scale, at a depth of 10 km and within a radius of 12 km of the statue.

The facial expressions on the Statue of Unity were also important. The initial design was made by acclaimed sculptor Ram Sutar. Based on his designs, mock-up was created and exhibited for people to see and comment on.

The flood levels in the 100-year history of the Narmada river. A detailed hydrological study was conducted to determine the base level of this statue.

The structure of the Statue of Unity

The Statue of Unity stands on the Sadhu hill in the middle of the Narmada River downstream to the Sardar Sarovar dam. A star-shaped base covers the hill. A 320-meter long bridge connects this island hill to the mainland. An escalator takes us along the bridge to the base of the statue.

The statue itself has two vertical cores. Each core houses a high-speed elevator which is used by the visitors to reach the viewing gallery – the highest point of the Statue of Unity accessible to the general public. The vertical cores support the steel frames to which about 6500 bronze panels are clad. 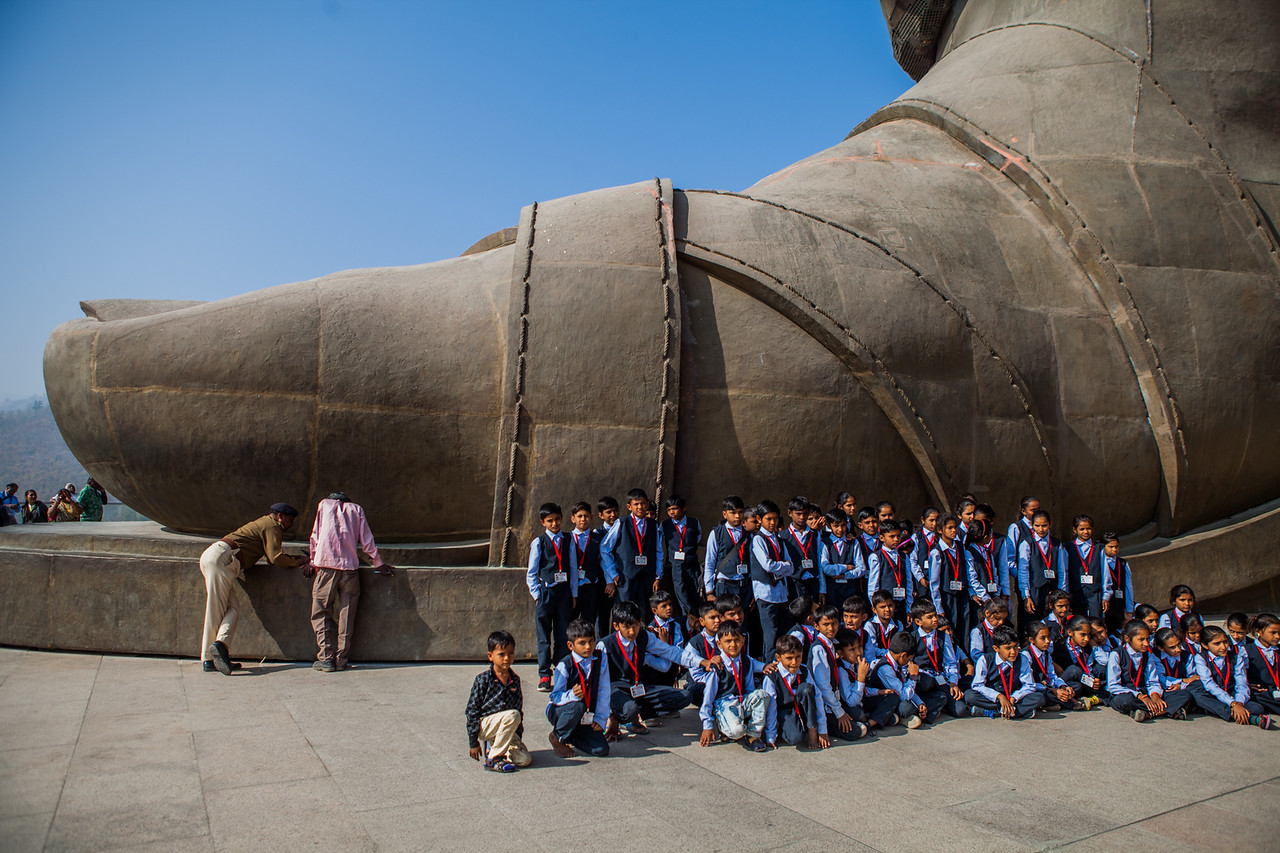 The visit to the Statue of Unity

Tickets can be purchased online or at the site itself. While the visiting fees are waived off for students, others need a high-value ticket to reach the viewing gallery.

The visit to the Statue of Unity is divided into three parts. The first is the base which houses a plush museum with several audiovisual displays. These depict the life and struggles of Sardar Patel and are a perfect introduction to his personality. Visitors unaware of the life of Sardar Patel can get a quick snapshot of who he was, and why this statue if a befitting tribute to this man. A 15-minute film based on his life keeps the young and old engaged. This museum is a good starting point to then move on to the higher levels of the statue.

At the next level, at the feet of the statue is where the size of the Statue of Unity actually hits. You realise that you do not even reach the start of its feet. Just to get a sense of its height, let’s assume that the height of an average man is five and a half feet. The statue is a hundred times taller than this! You have to crane your neck to get a full view of the statue – but it makes for an interesting view of the statue – especially against the blue sky. 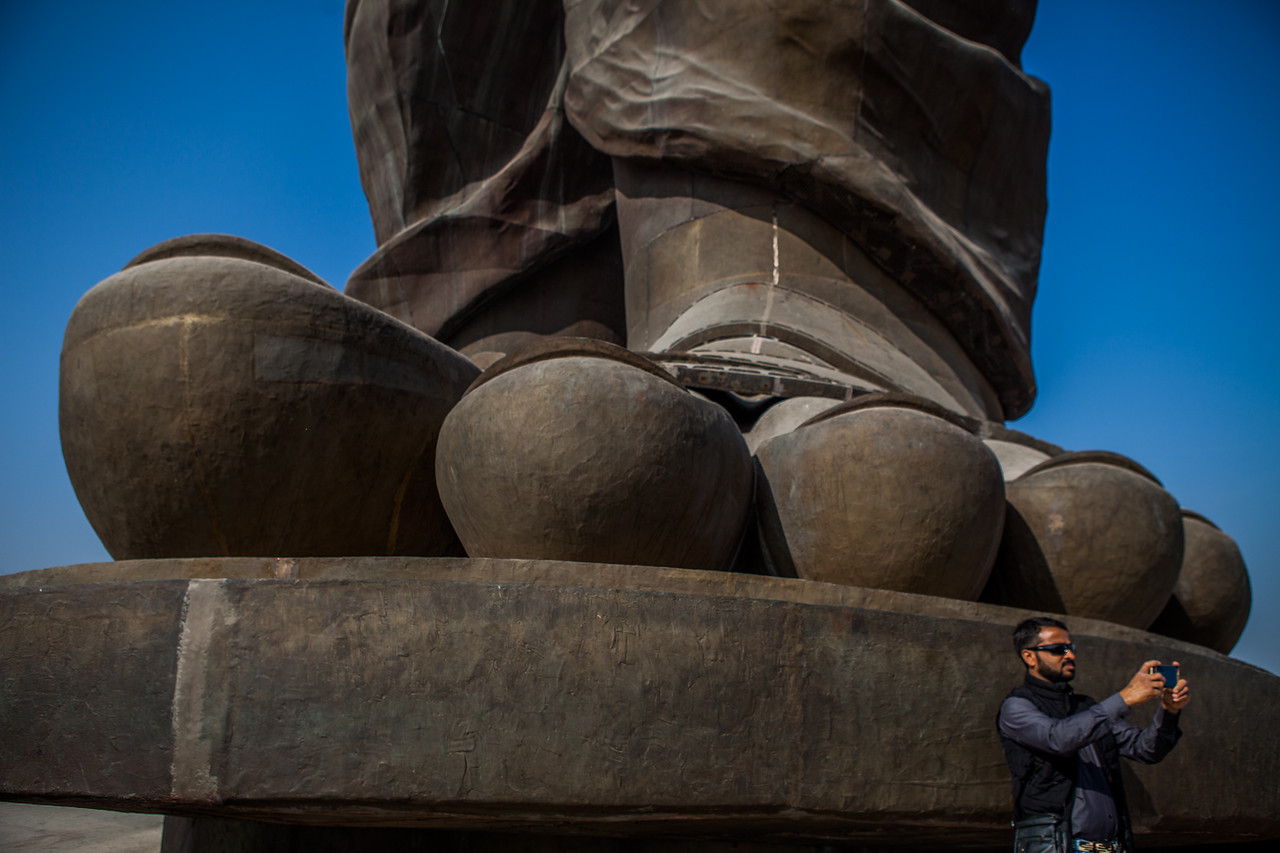 The third level is the viewing gallery – which is at the chest level of the Statue of Unity at 153 meters. It can accommodate 200 people at a time and has balconies all around. The front presents enchanting views of the Sardar Sarovar dam and the shimmering blue waters of the river Narmada. The robust hills of Satpura and Vindhya mountain ranges add to the towering feel of this spectacle.

What else is there to visit at the Statue of Unity venue?

The Valley of Flowers, still a work in progress, is presently a pretty little multi-storey garden with a collection of flowers from all across the country. There are plans to extend it to 11km on one bank of the river Narmada and 6 km on the other. The river Narmada separating the two mountain ranges of India – the Satpuras and the Vindhyas is clearly visible from here as well. And in front is the overpowering Statue of Unity. While at the garden, look out for a plantation forming the map of India!

Sunset is the best time to visit this garden. The view of the Statue of Unity with the sun setting behind the mountains is a sight to behold!

The Sardar Sarovar dam is also just 3.5 km from the Statue of Unity and a must-visit. Dreams. Power. Energy. Nature. You’re bound to feel a burst of emotions! 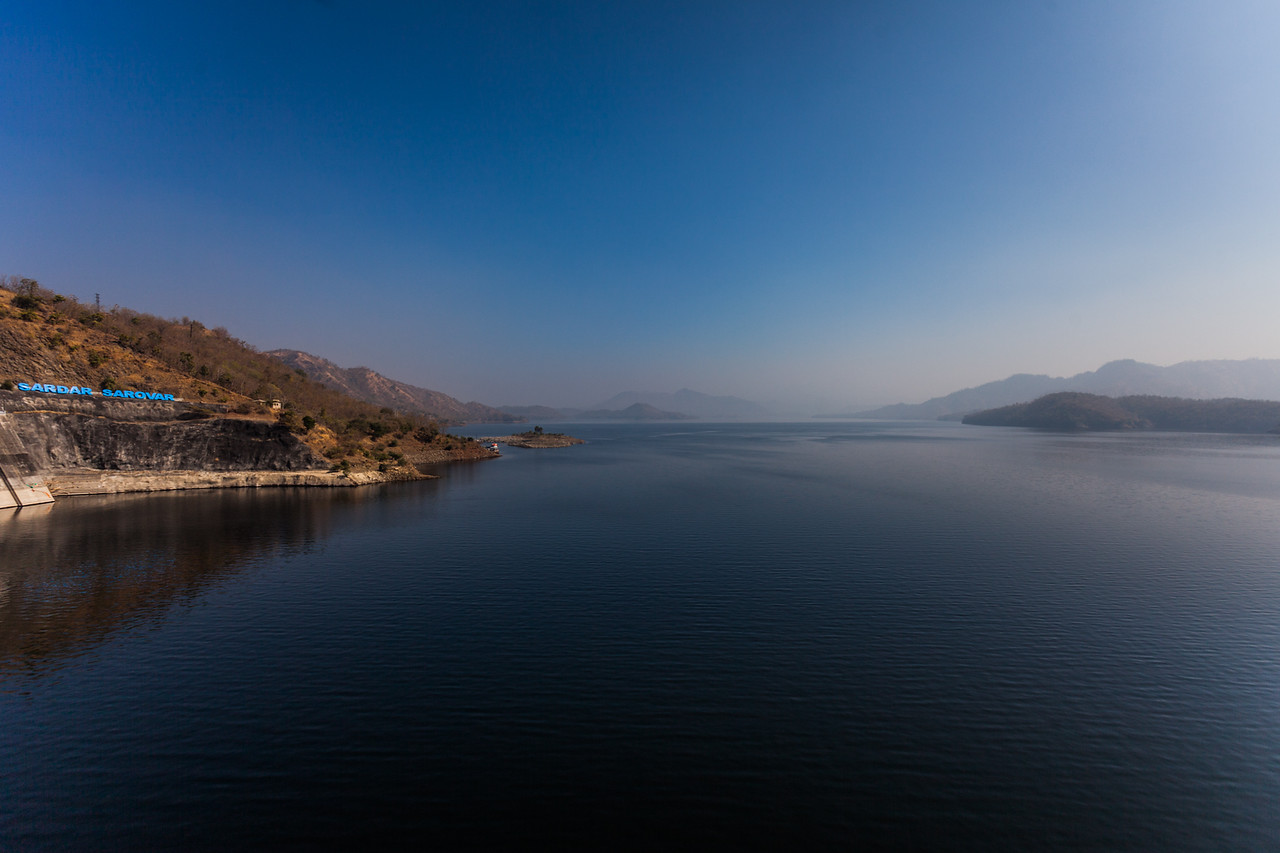 Where to stay when you visit the Statue of Unity

Narmada Tent City has been constructed in the village of Kevadia, where the Statue of Unity actually stands. Similar to the stay arrangements at the White Rann of Kutch, this tent city is comfortable in the winters as well as summers. Food is taken care of within this tent city. Post dinner, under the open skies, you can enjoy some cultural performances by the local tribes. 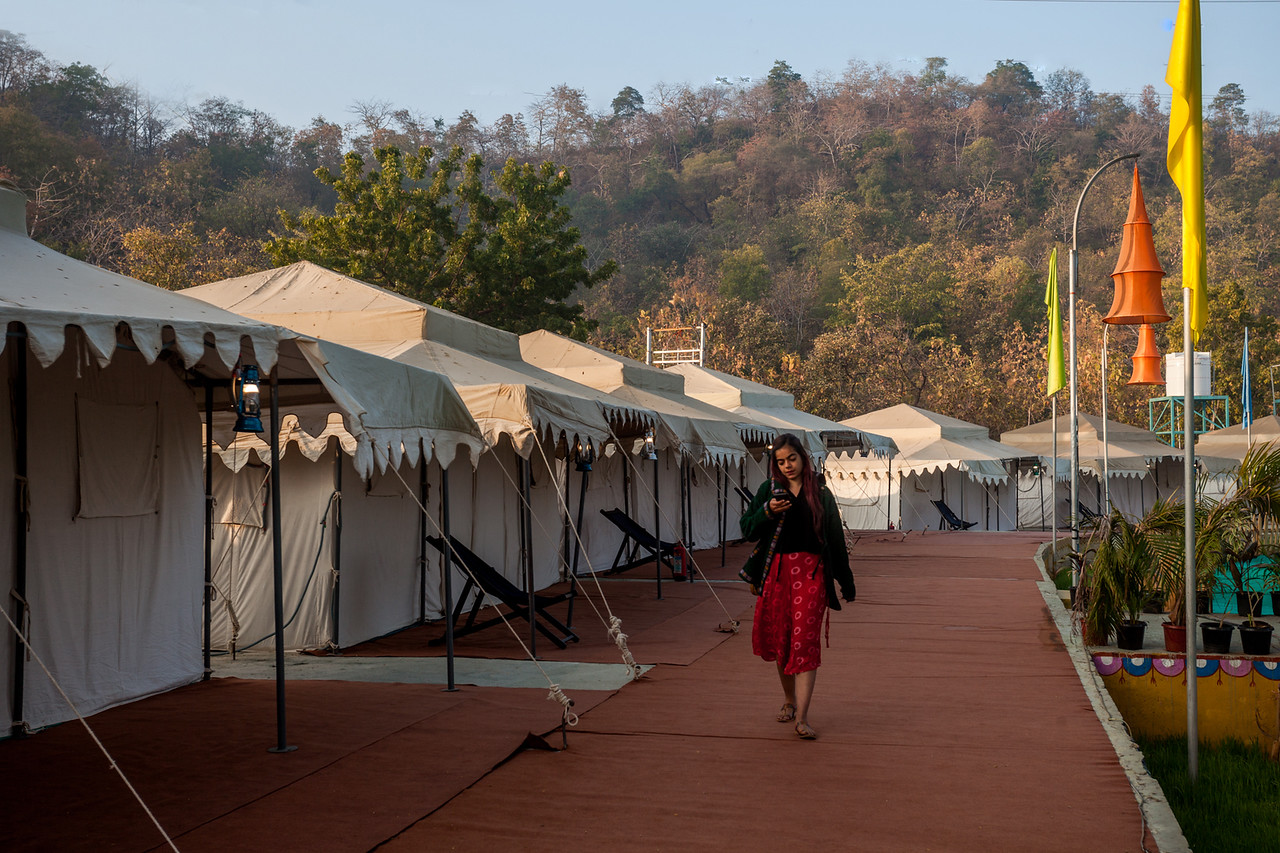 What other places can you combine with your visit to the Statue of Unity?

You can have a short holiday in Gujarat when you visit the Statue of Unity. The culturally vibrant city of Vadodara is only a 90-km drive from here.

If nature is your thing, then rejoice! The Statue of Unity stands at the edge of the Shoolpaneshwar Wildlife Sanctuary. 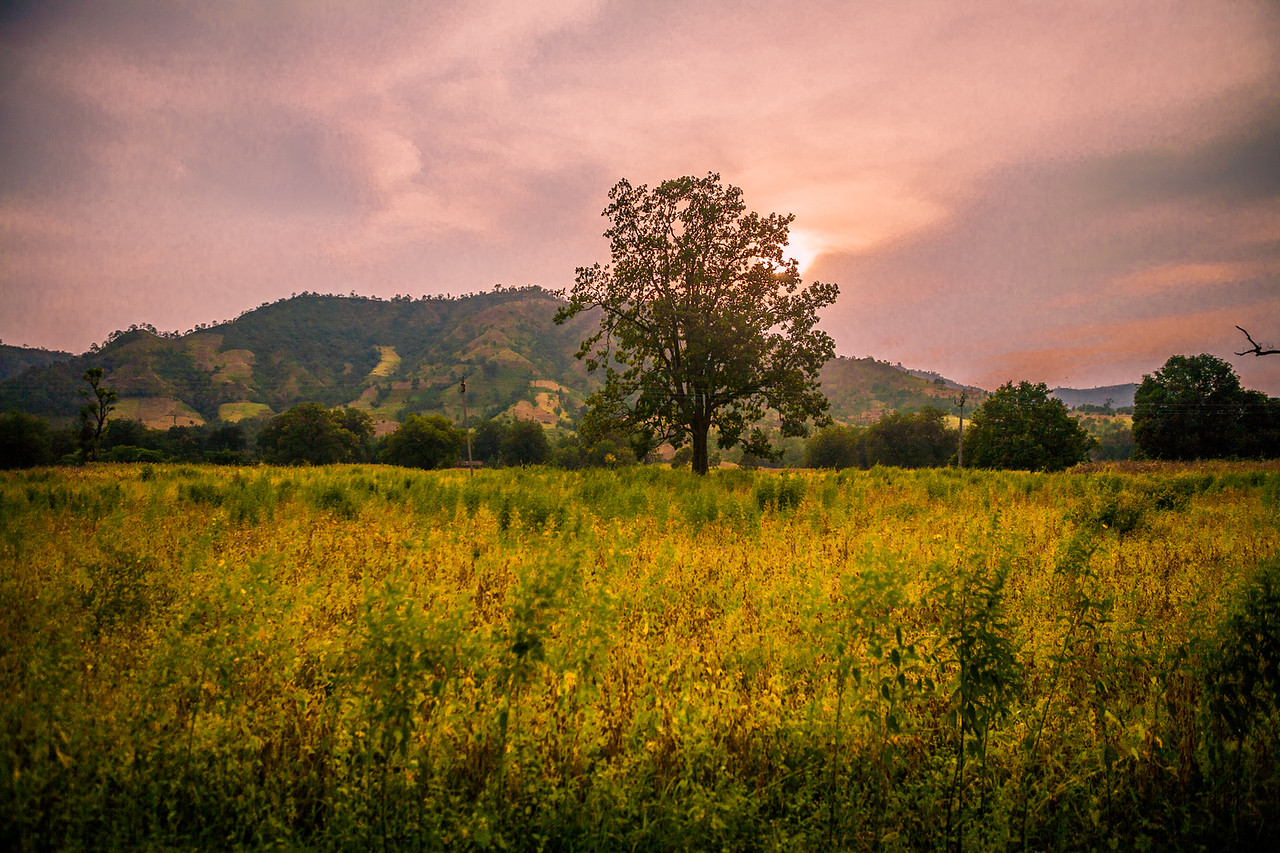 Have you visited the Statue of Unity? How was your experience? Let us know in the Comments!

We are thankful to Gujarat Tourism for hosting us and arranging our visit to the Statue of Unity. As we have always said, we write only what our experience has been at any place!

Basar: A must visit destination in your travel itinerary for Arunachal Pradesh